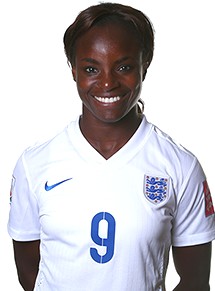 Three Lionesses manager, Mark Samspon, has named his starting line - up for his side’s eagerly anticipated showdown with hosts Canada in the quarter- finals of the Fifa Women’s World Cup.

The big news as it concerns Nigerians is that Cheslea’s Anglo-Nigerian striker Eniola Aluko has not been included in the starting XI for the third straight game.

The 28 - year - old was excited hours leading up to the clash at BC Place Stadium, Vancouver and posted on Twitter, “England v Canada! Quarter final of the FIFAWWC, what dreams are made of.”

Eniola Aluko has featured in two matches at the tournament, against France and Mexico, but failed to open her account at the Women’s World Cup after playing a total of 8 games dating dating back to her debut in 2007.