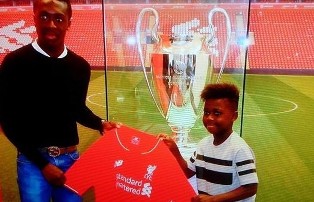 Nigeria target Bobby Adekanye made his debut for the Liverpool Under 18s on Saturday night in their 2 - 0 win over League of Ireland Premier Division side Cork City.

Though, the Dutch youth international did not score in his maiden appearance for The Reds, he troubled the opposition defense a lot.

And in one of his moves, the 16 - year  - old set up Portuguese youngster Gomes for the opening goal of the game staged at Turner’s Cross Ground.

On 71 minutes, substitute Dhanda gave the visitors a two - goal cushion, and the scoreline remained the same until the final whistle.

Bobby Adekanye penned a three - year deal with Liverpool at the start of this month, according to his dad, Ademola Adekanye.