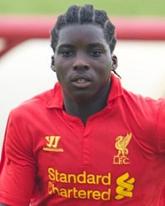 While the highly - rated starlet only made the bench, winger Jordon Ibe has been named as a starter along with new signing Milner and Divock Origi, who has returned to The Reds after spending last season on loan at Lille.

Sheyi Ojo was an unused sub in Liverpool’s friendly games against Thailand All - Stars and Brisbane Roar.

On the other hand, Ibe came off the bench in both matches, lasting 73 minutes on the pitch in the process.

Youngsters Ovie Ejaria and Bobby Adekanye did not travel with the squad to Australia.