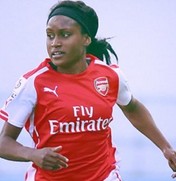 Chioma Ubogagu’s 53rd minute goal sealed victory for Arsenal over Birmingham City in the eighth round of matches in the WSL.

Ex USA youth international Ubogagu was pleased to score her fourth away goal of the season , and happy that she has adapted quickly after arriving in London from Stanford University in February.

“I was just pleased to get the opportunity to play 90 minutes,”  the Arsenal striker told arsenal.com.

“I’m new to the team and if I’m getting a start in our away games that’s great, but it was about winning the game against Birmingham.”

The win has lifted the Gunners to second in the standings with 15 points, two less than log leaders Chelsea, who were thrashed 4 - 0 by Sunderland last weekend.