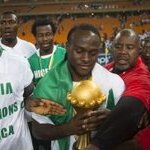 In his post match comments shortly after Chelsea lost 4 - 2 to New York Red Bulls in their first pre - season fixture, manager Jose Mourinho refused to confirm whether winger Victor Moses will be farmed out on loan for the upcoming season.

But the Portuguese coach admitted that the Nigeria international has developed into a good player over the last few years but needs to adapt to The Blues philosophy, having spent two seasons on loan at Liverpool, then, Stoke City.

“Victor is strong, he’s experienced and he knows the Premier League well,” Mourinho said, according to chelseafc.com.

“He’s fast and aggressive. Okay, he has to learn how to play with us but I’m happy with his week and his 45 minutes.

“Let’s see what happens but Victor had an evolution in the last couple of years.”

Victor Moses was handed a starting shirt alongside John Obi Mikel but both were subbed out immediately after the intermission.