...the complete Nigerian football portal
Subscribe
Dele Alli Delighted To Get Off The Mark For Tottenham Hotspur
Published: July 23, 2015 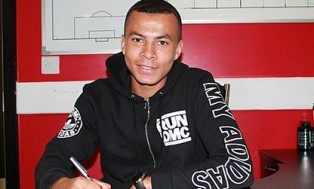 England Under 19s international Dele Alli has expressed his joy at scoring in his maiden appearance for Tottenham Hotspur.

Against Brentford on Wednesday, the attacking midfielder, a second half substitute, dispatched a penalty in the closing stages of the scrimmage after he was brought down by Bonham.

“I know it’s pre-season but it’s always good for the confidence to be winning games,” Alli told tottenhamhotspur.com.

“It’s also a huge weight off my shoulders to get that first goal because sometimes you can get into a run of form where you just can’t find a goal, so I’m happy to pick up where I left off last season.”

The Football League Young Player of the Year scored 16 goals in 38 games last season while on the books of MK Dons.