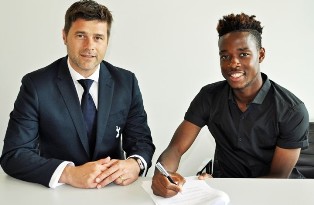 At the age of 18, the England youth - teamer made his debut for Spurs, coming off the bench against Burnley in the FA Cup back in January.

“Harry, Nabil, Ryan and Andros are inspirational for us. They have all come through the Academy and they have all given us belief, they have shown that it is possible.

“It’s great to be around them, to ask their advice and learn from them day to day.

“I’d love to follow in their footsteps. I just want to play for Tottenham for many years to come.”

Joshua Onomah featured in the pre - season friendlies against Malaysia and Sydney FC this summer.