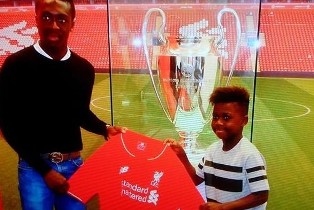 Holland youth international Bobby Adekanye continues to shine for the Liverpool Under - 18s in pre - season ahead of their opening game in the Academy League against Manchester City.

The winger was handed a starting spot in the 3 - 1 victory against Lincoln City in a friendly on Thursday night, and was involved in  defender Michel Parker’s strike from a corner.

Bobby Adekanye was happy with the win and more pleased that he was able to contribute to The Reds first goal.

“Good 3-1 win yesterday, happy to assist my bro @michelparker95 on his first goal for Liverpool,” Bobby Adekanye posted on Twitter.

The former Barcelona whiz kid has signed a three - year contract with Liverpool, his dad has exclusively informed allnigeriasoccer.com.