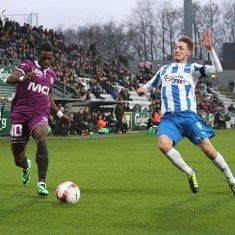 The young star scored his first goals as a professional in Skive’s 3 - 1 win against Vestsjælland at the Egeris Kunstgræsbane on match day three in the Danish First Division.

On the hour mark, Adebayo opened scoring for the home team after capitalizing on an assist from Thiago, then, he doubled Skive’s advantage three minutes later.

The 20 - year - old, who is on a season - long loan from FCM, made his debut for the Jutland outfit in their 2 - 0 loss to  Vendsyssel towards the end of last month.

Skive sit fifth on the table with 4 points in the kitty.