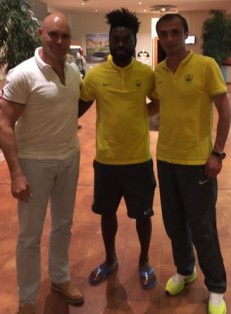 Lukman Haruna had to be substituted immediately after the intermission in Anzhi Makhachkala’s  3-  2 loss to Dinamo Moscow in the Premier League on Saturday after picking up a thigh injury.

Manager Yuri Semin has disclosed that he didn’t want to take a risk after the Super Eagles midfielder complained of being injured.

“He was injured, he could not play, ”  said Yuri Semin to the official website of Anzhi, fc-anji.ru.

“Lukman said that he could not come out in the second half because of pain in the muscle of the inner thigh, he had to be replaced. I did not want to take a risk.”

Haruna has been named in the starting XI four times this season and scored against Lokomotiv Moscow in his second game in Russia.