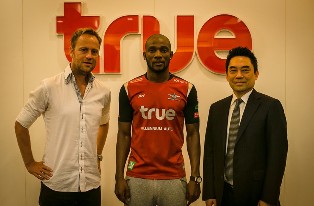 Bahrain international Jaycee Okwunwanne opened his goalscoring account for Bangkok United in their 2 - 1 win against Army United on Sunday.

The 29 - year - old joined  The Bangkok Angels last month and has now played two games for his new employer in the Thai Premier League, having made his debut in the 4 - 0 loss to Ratchaburi last weekend.

In the 19th round game staged at Thai-Japanese Stadium, Okwunwanne broke the deadlock in the 38th minute but Chatchai Mokkasem leveled matters for the visitors just before half time.