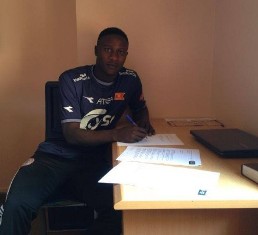 Samuel Adegbenro and Flying Eagles striker Suleiman Abdullahi were named in the starting line - up and helped Viking qualify for the semi - finals of the Norwegian Cup following their 3  - 0 thrashing of holders Molde.

In front of roughly 8, 000 spectators, ex Kwara United starlet Adegbenro opened scoring in the 22nd minute in Stavanger before Böðvarsson and Sigurðsson registered their names on the scoresheet either side of the half.

Both Nigerians did not go the distance, with Samuel Adegbenro subbed out in the 86th minute, nine minutes before Abdullahi was replaced by Kieffer Moore.

Following their win, Viking have set up a semi - final showdown with Sarpsborg 08 next month, with a place in the showpiece final up for grabs.

Chuks Akabueze worked 90 minutes in attack for Odd Grenland in their loss to Sarpsborg 08, despite the Europa League campaigners taking an early lead. The ex Flying Eagles winger was yellow - carded nine minutes from time.