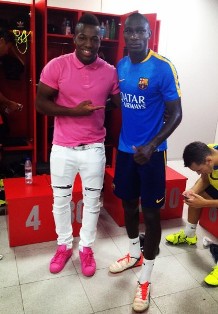 Both Africans started out at the La Masia Academy , rising through the ranks before they were promoted to the B team of the Blaugrana.

“I want to wish all the best to my brother Adama for his new team, ” Godswill Ekpolo said on social media.

“I am very happy to share with him the best moment of our journey. Good luck and God bless you brother.”

Adama Traoré, who has represented the youth teams of Spain but remains eligible to play for Mali at senior level, has penned a five - year contract with Aston Villa.