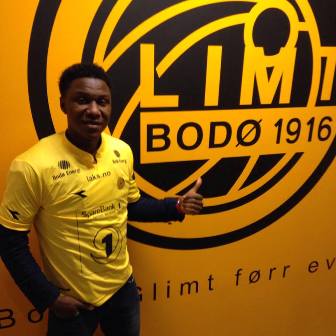 Bodø / Glimt midfielder Dominic Chatto says his appearances in the Tippeligaen were limited due to injury but the team are now on the right track since he became fully fit.

The former Pepsi Academy player opened his account in the Norwegian Premier League on Sunday as Bodø / Glimt defeated William Troost - Ekong’s Haugesund 4 - 2, after scoring in the 17th minute to bring the scoreline to 1 - 1.

Definitely the form team in the league, Bodø / Glimt, who were flirting with relegation in the early stages of the season, have won seven of their last eight games in the top flight.

“No we are not afraid of the relegation but we love to win games, ” said Dominic Chatto to allnigeriasoccer.com.

“We are football players and the relation between the players has only been getting better for each game we play. That has helped us to win these games. ”

The Bodø / Glimt number 15 added : “It was bad luck in the beginning of the season because I was down injured but I am so happy now.

“Since I came back we played 8 games and won 7 of them. That shows how important I am to the team.”

As at game week 21, Dominic Chatto has appeared 12 times in the league, including 9 starts.