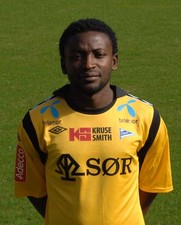 Ex Nigeria Under 20 international Solomon Owello has made his debut for his new Norwegian club Sandnes Ulf.

Only last week, the attacking midfielder ended his seven - year association with Premier League side IK Start by penning a short - term deal with Sandnes Ulf that will keep him at the club until the end of the 2015 season.

And on Monday, August 24, Owello went the distance as Sandnes Ulf lost ground on league leaders Sogndal after they were beaten 2 - 0 by promotion - chasing Hodd.

For the next three months, the playmaker will represent The Wolves in the league with the number 18 kit.

The 26 - year - old played 19 games for IK Start in the Tippeligaen this season before his departure from Kristiansand.