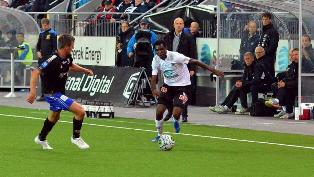 Chuks Akabueze has expressed confidence that he can surpass his best - ever goal tally in a single - season, having scored his seventh goal in the Tippeligaen on Sunday as Odd Grenland beat Stabæk 2 - 1.

The Nigeria international , who was on target in the 10th minute at Nadderud Stadion, had his best season in the Norwegian Premier League, goalscoring wise, back in the 2012 campaign when he hit target 9 times in 28 matches before he moved to China the following year.

“It was a very good game, a very tough away match. We scored our two goals in the first half but the game became tougher for us because of the red card to Gashi, ” Bentley told allnigeriasoccer.com.

“They kept pressing us but we were determined to hold on to the lead and we won.

“To be honest, my target is to surpass the nine goals I scored in 2012. I am working on it and I am going to do it this year.”

Across all competitions this term, Chuks Akabueze has found the back of the net 9 times in 33 matches.