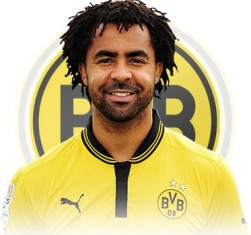 Patrick Owomoyela has opined that Borussia Dortmund can challenge Bayern Munich for the Bundesliga title this season.

The Bavarians are the three - time defending champions but the retired Germany international reckons that this former club are genuine contenders especially as they have a new coach Thomas Tuchel, who has led the team to three wins on the spin.

“We’ll have to wait and see what happens when they play the really top teams like Bayer 04 Leverkusen, the derby against FC Schalke 04, or against FC Bayern München,” Owomoyela told bundesliga.com

“Then they can show us how strong they really are. Their Europa League wins were to be expected, as were their victories in the DFB Cup and the Bundesliga – they were all opponents you’d expect them to beat on a normal day.

“But I’m confident they can keep it going, and that they’re serious challengers to Bayern for the title.”

Hamburg - born Patrick Owomoyela represented Borussia Dortmund from 2008 - 2013 and played 76 games, scoring 3 times, before ending his collaboration with the club.