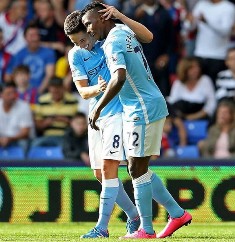 More Manchester City players have paid tribute to Kelechi Iheanacho for scoring his first goal for the Etihad outfit on Saturday.

The Nigeria youth international became the third youngest player to score for The Citizens in the Premier League after Micah Richards and Daniel Sturridge, when he hit target in the 90th minute against Crystal Palace.

Brazil midfielder Fernandinho added : “Great win today, we fight to the end. congratulations to Kelechi for the first of many goals, thanks…”

Kelechi Iheanacho will not be in action on Tuesday in City’s Champions League clash against Juventus as he was not registered for the group stage of the competition.