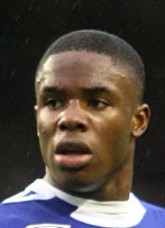 West Brom striker Victor Anichebe has jumped on the bandwagon in support of Manchester City starlet Kelechi Iheanacho after the teenager opened his account for the English Premier League vice - champions on Saturday.

Compared to Iheanacho who scored his first goal in the Premier League aged 18 years, 11 months and 9 days, Anichebe remains the youngest Nigerian player to score in the top flight, scoring after 84 minutes in Everton’s 2 - 2 draw with his current club West Brom at the age of 18 years and 14 days in May 2006.

“Big congrats to Kelechi on your first senior goal and Ighalo Jude on another goal. Future looking bright for Nigeria,”Anichebe posted on social media.

If the 2010 - 11 season and the ongoing campaign are not included in the mix, Victor Anichebe has finished each Premier League season with at least one goal since making his debut in April 2006.