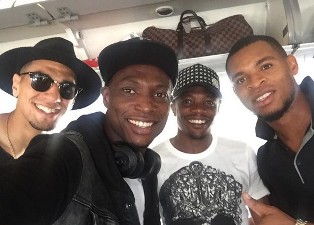 Anthony Ujah scored an injury - time winner for Werder Bremen in their dramatic victory over Hoffenheim in game week 4 of the German Bundesliga.

Shortly after Ujah’s goal, Zlatko JunuzoviĂ„‡ netted his second goal of the game in the 93rd minute to bring the scoreline to 3 - 1.

Speaking immediately after the tie held at Wirsol Rhein-Neckar-Arena (Sinsheim), the Nigeria international has played down his team’s performance,  stating that they were lucky to get the three points and hailed the immediate impact of new signing Claudio Pizarro.

“We play especially well in the first half. The equaliser wasn’t good for us, but we didn’t give up and fought until the end,” Ujah told Werder Bremen’s official webpage.

“Obviously we had a bit of luck with the win and I thought it would end in a draw by the end.

“But I was in the right place at the right time and luckily I was able to put it away! ”

The 24 - year - old went on : “I’m certain that Claudio will help us improve, but I never thought he would have such an immediate impact. I’m delighted that he is in our team.”

Anthony Ujah has now scored three times against Hoffenheim in the German Bundesliga.