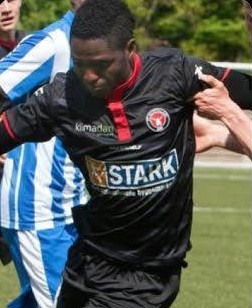 Razak Adebayo’s goal for Skive on Sunday was in vain as they lost 3 - 1 to Vejle in a Danish First Division game.

With the visitors trailing their opponents 2 - 0 after only 14 minutes, the young Nigerian pulled a goal back in the 17th minute to give Skive hope of a comeback.

But Edmundsson scored his second four minutes from the interval to condemn Skive to their fifth defeat of the season.

The 20 - year - old Adebayo scored his first professional goals in Skive’s 3 - 1 win over Vestsjælland on August 7.

FC Midtjylland has farmed him out on loan to Skive until the end of the 2015  - 16 season.