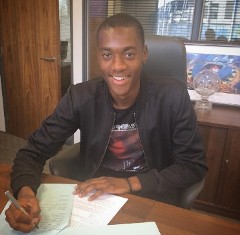 Manchester City Under 19 manager Patrick Vieira has included England youth international Tosin Adarabioyo in his starting line - up for Tuesday’s  UEFA Youth League clash against Juventus at the Academy Stadium.

The highly - rated central defender was the only player of Nigerian descent considered, with Tom Dele-Bashiru, Ashinme Kigbu and Nathaniel Oseni missing out while Flying Eagles star Iheanacho has been promoted to the first team.

Last season, Tosin Adarabioyo was an important member of City’s U19 squad that qualified for the quarter- finals of the competition.

The 17 - year - old started and completed every single game before the Citizens were knocked out and scored against Bayern Munich in the group stage.

Juventus U19s striker Paul Akpan Udoh, who scored against Malmo in the Youth League a year ago, starts on the bench.