...the complete Nigerian football portal
Subscribe
Odion Ighalo On Jordon Ibe Decision : It Will Not Bring Any Problem To Super Eagles
Published: September 17, 2015 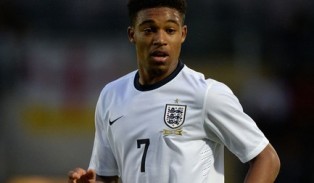 Watford striker Odion Ighalo has appealed to supporters of the Super Eagles to respect Liverpool winger Jordon Ibe’s decision to turn out for England instead of the country of his father, Nigeria.

Nigeria manager Sunday Oliseh first broke the news on Sunday that the youngster has rejected Nigeria’s advances before the player confirmed via a statement published on the official website of his club few days later that he was committing his future to the Three Lions.

“To play for England not to play for Nigeria, I don’t have anything against that because that is his choice, ” Odion Ighalo told Soccer Africa from England on Thursday.

“He is human so we respect everyone’s decision, I don’t think it can change or bring any problem to the team.”

Jordon Ibe, an England Under 21 international, was in action for 90 minutes on Thursday night as Liverpool played out a 1 - 1 draw with Bordeaux in their Europa League opener.