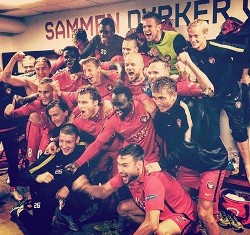 FC Midtjylland striker Paul Onuachu was pleased that the Danish champions began their Europa League campaign with a 1 - 0 victory against Legia Warsaw.

The Nigeria U23 international was given a run out by manager Jess Thorup in the closing stages, having replaced Pione Sisto in the 81st minute.

Thursday night’s game at the MCH Arena was the former FC Ebedei talent’s 50th career game since his move to Europe in 2012.

FC Midtjylland are level on three points with Napoli after the opening round in Group D.