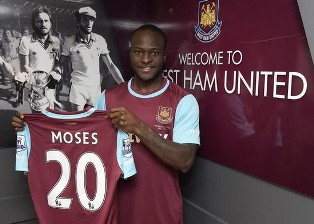 In his second Premier League appearance for West Ham, Victor Moses has opened his goalscoring account for the Hammers, assisting the Londoners defeat table toppers Manchester City 2 - 1 on Saturday evening.

On six minutes, the Nigeria international beat Joe Hart from long range with a low strike after being fed by Dimitri Payet and Sakho gave West Ham a two - goal cushion in the 31st minute before De Bruyne pulled a goal back for the home team in first - half stoppage time.

Of the 53,545 spectators at the Etihad Stadium , 1,251 were West Ham supporters and Moses has thanked the traveling fans for their support and was delighted to score his maiden goal for the club.

“ Great win lads worked so hard and always nice to get on the scoresheet. Thanks for all the support the fans were unbelievable!” said Victor Moses on Twitter.

Victor Moses has scored for each of the teams he has represented in the Premier League - Wigan Athletic, Chelsea, Liverpool, Stoke City and West Ham.

Nigeria youth international Kelechi Iheanacho made his third EPL appearance, coming off the bench in the 84th minute as replacement for Aleksandar Kolarov.