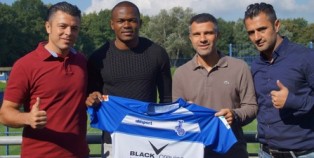 Two Nigerians were on target at the Stadion An der Alten Försterei (Berlin) as MSV Duisburg lost for the fourth game in a row on Saturday in the 2 Bundesliga.

Trailing 3 - 0 going into the intermission, Nigeria international Victor Obinna pulled a goal back for the Zebras 11 minutes after the restart, firing home from 10 meters to net his first goal in the colours of his new employer.

Then, six minutes from time MSV Duisburg number 10 Kingsley Onuegbu struck his second goal of the season but Union Berlin managed to secure all three points at the end.

Victor Obinna, who made his league debut on Wednesday against Eintracht Braunschweig, went the distance while Onuegbu joined the fray in the 67th minute.

MSV Duisburg are the bottom team in the second - tier, with only 2 points garnered after nine rounds.