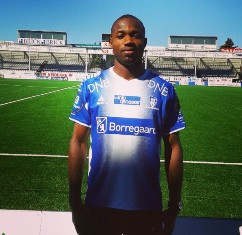 A maiden goal by Onyekachi Ugwuadu saved Sarpsborg 08 from defeat in their Norwegian Premier League tie at the Skagerak Arena against Chuks Akabueze’s Odd Grenland.

While the Nigeria international lasted the distance, Sarpsborg’s new signing Ugwuadu hopped off the bench in the 68th minute in what was his second - ever game as a professional.

In the first minute of stoppage time, the 18 - year - old striker restored parity for his side after Pape Diouf had put the home team in front in the 13th minute.

Prior to today’s game, Onyekachi Ugwuadu only had a brief taste of first - team football when he came off the bench in the 88th minute in Sarpsborg 08’s 3 - 1 win over IK Start on September 13.

The Gee Lec IFA product is tied to the Tippeligaen club until the end of the 2019 season.