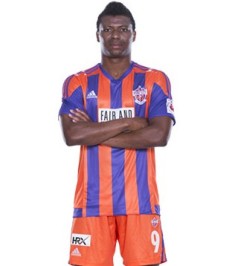 Kalu Uche opened his goalscoring account for Pune City on Wednesday afternoon in the Indian Super League but could not prevent his new employer from suffering their first defeat of the young season.

On 23 minutes, Robin Singh opened scoring for Delhi Dynamos before Richard Gadze netted an insurance goal to give the visitors a 2 - 0 lead in stoppage time.

But with the last action of the game, Kalu Uche pulled a goal back for the previously undefeated Pune City when he headed into an empty net off a pass from Lyngdoh.

On his debut for Pune City, the Nigeria national - teamer lasted only two minutes on the pitch but played the full game today.

Uche, 32, has penned a short - term deal that will run out at the end of this season.