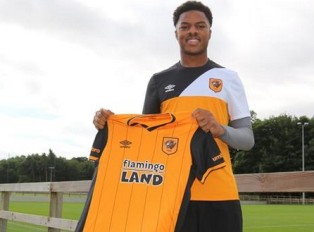 Chuba Akpom is not short of confidence ahead of Hull City’s Championship clash against Sheffield Wednesday, having scored on his debut for the Under 21 national team of England on Tuesday night.

The Arsenal loanee has not scored for The Tigers since the Capital One Cup clash against Accrington Stanley on August 11.

“Scoring goals is what I love to do and I’ve been practising every day in training to find a way to score. I should have scored more and I’ll keep on working hard to get the goals for club and country.”

The Anglo - Nigerian has admitted that he was worried about his scoring drought, which has stretched to 10 games across all competitions for Hull City.

“It does play on your mind when you haven’t scored for a few games. You try and not let it affect things too much and just try to find a way to help the team.

“Thankfully we’ve picked up a lot of points recently and hopefully I can help out with more goals sooner rather than later,” he added.