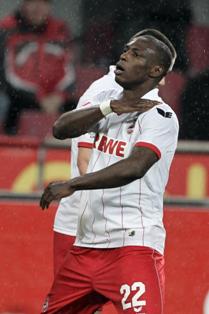 Anthony Ujah put in a great performance against his former team, Cologne, with his decisive goal helping Werder Bremen qualify for the last 16 of the DFB Pokal on Wednesday.

On 23 minutes, the Super Eagles striker turned his defender before firing past Horn after he was fed by Fin Bartels.

“It was a great pass from Fin. My first touch was very important to put me in the right position,” said Anthony Ujah to Werder Bremen’s official website, werder.de.

“I think the finish was alright and that I did everything correctly.”

Quizzed about the team he does not want to face in the next round, Ujah replied : “Anyone except Bayern.”

The 25 - year - old has netted 6 goals in 12 matches across all competitions and was on target in the 2 - 0 win against Würzburger Kickers in the Cup two months ago.