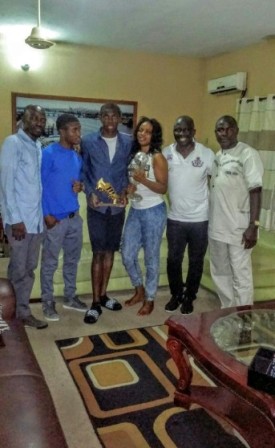 The bonafide representative of Golden Boot winner at the Fifa Under 17 World Cup, Victor Osimhen, has made it crystal clear that there is no truth to reports that claimed the striker has agreed a deal with Tottenham Hotspur.

Shira Yussuf, the elder brother of Nigeria international and ex Dynamo Kiev midfielder Yussuf Ayila, and his partner, Ariyo Igbayilola, have pleaded that their client should not be unsettled with transfer speculations, as he just returned to Lagos after spending several months with the Under 17 national team.

“We have not agreed anything with Tottenham Hotspur, it’s just speculation, ” Yusuf Shira Ayila told allnigeriasoccer.com.

“Victor Osimhen needs to rest, they shouldn’t unsettle the player with these transfer stories. How will a player be in Lagos and they are speculating he has signed a contract with Tottenham Hotspur?”

Shira Yussuf added : “ For now we don’t know where he’ll play. We have a lot of top clubs in Europe that are after Osimhen but in due course the public will know where he is heading to. We can’t decide without the player.”

Allnigeriasoccer.com has been informed by sources close to the situation that Osimhen is likely to join an English Premier League club, with the likes of Manchester United, Man City, Arsenal, Chelsea and Liverpool all scrambling for his signature.

The Ultimate Strikers poster boy etched his name into Fifa Under 17 World Cup folklore after netting 10 times at the recently concluded tourney in Chile.

Victor Osimhen arrived in Lagos late last night from Abuja alongside his coach, Chinedu Ogbenna, and his intermediaries.