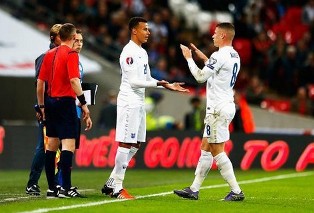 Anglo - Nigerian midfielder Dele Alli marked his first start for England with a goal against France in international friendly staged at Wembley on Tuesday night.

The 19 - year - old opened scoring for the Three Lions with a stunning 25 - yard shot which beat Tottenham Hotspur teammate Hugo Lloris six minutes before the interval.

“Obviously, I’m really happy to get the goal and the win at Wembley, ” Dele Alli said to FATV after the game.

“It was a really proud moment for me to even start today, so to get the goal and the man of the match rounds off a perfect night along with the win.

“It was a young team but I think we played with a lot of maturity, and it’s great to have the experienced players with us when we need it. ”

Milton Keynes - born Alli has recorded four appearances for England since he debuted for the senior side and was in action for 88 minutes against The Blues last night.