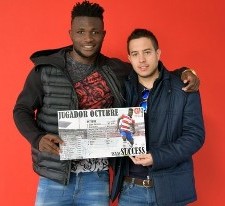 The G19 Peñas Association of Granada CF has named Nigeria youth international Isaac Success as the Player of the Month for October 2015.

During the period under review, the ex Golden Eaglets star was named in his team’s starting line - up 2 times out of a possible 3, in games against Real Betis and Espanyol, while he was a second - half substitute against Deportivo de La Coruna.

Success scored his second goal of the season and his third in Granada’s colours in the 41st minute of the contest against Sporting Gijon on October 19.

The 19 - year - old was selected as one of the 21 players to represent Nigeria at the Africa U-23 Cup of Nations but was replaced at the last minute after the Spanish club failed to sanction his trip to Gambia to link up with the squad at a training camp.

The BJ Foundation product is now in good physical condition after recovering from a hamstring complaint.