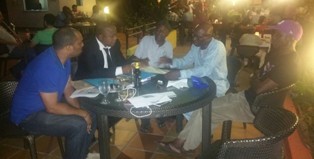 Patrick Osimhen, the biological father of Nigeria Under 17 international Victor Osimhen, has handed over the responsibility of the management of his son to influential French agent Oliver Noah of Noga Sports Management.

Patrick Osimhen has stressed that he remains the legal guardian of the Golden Eaglets sensation and any other party dealing with the player other than him is acting ultra vires and any subsequent agreement is null and void.

He has decided to clear the air, as some intermediaries decided to bypass him, preferring to deal with his first son, Andrew Osimhen, instead over contract negotiations for the Golden Boot winner.

“I am the sole surviving parent and biological father of Victor Osimhen, the Nigeria national Under 17 team player. I have not given anyone, even any member of the family the legal guardian of my son or that of any of my children, ” Patrick Osimhen said in a statement made available to allnigeriasoccer.com.

“I, Patrick Osimhen hereby state that I gave Oliver Noah consent to represent the interest of my son Victor Osimhen and the entire family with any interested football clubs in Europe.

“I urge Ultimate Strikers, the football academy of Victor Osimhen to cooperate with Oliver Noah in making the dream of my son and the interest of my family a reality.”

Shira Yussuf, who previously represented Victor Osimhen, is thought to have traveled to Senegal to watch the Africa U-23 Cup of Nations alongside Andrew Osimhen and was unavailable for comments as at the time of this report.

It is understood that Patrick Osimhen has received four offers from European teams interested in landing the signature of the much - coveted striker but is waiting for Victor Osimhen to return from Senegal before making his choice.