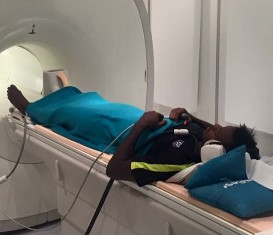 Austria Vienna striker Kayode Olanrewaju has revealed that he will miss his team’s final game of 2015 against Rheindorf Altach  next weekend on account of injury.

The former Flying Eagles star took to the Lavanttal Arena pitch on Saturday in the 64th minute but had to be carried from the field  in the 82nd minute due to injury, and his team had to play a man short until the end of the game since they had made three changes.

At first it was thought that Kayode damaged ligaments in his knee but the result of an MRI examination showed that he picked up an ankle injury.

“Yes, I got injured against Wolfsberger AC. I will be out of action for four weeks so I won’t play the last game on the 12th of December, ” said Kayode Olanrewaju to allnigeriasoccer.com.

“I was hit by an opponent. When I get back from holiday by January I will be back.”

The former Maccabi Netanya frontman has smashed 8 goals in 19 games in the Austrian Bundesliga.