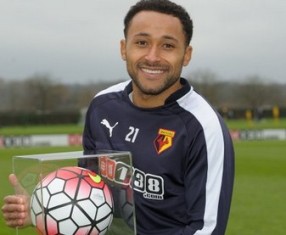 Watford’s Anglo  - Nigerian midfielder Ikechi Anya has spoken of his happiness after he was recognized by the English Premier League.

The Scotland international has been presented with an award for making his debut in the top - flight of English football this season.

The award was introduced in the 2015 - 16 campaign for homegrown players in every Premier League club that have made their first appearance in the league.

“I was made aware of it the other day, and I’m really quite grateful to receive it, ” Anya told Hornets PlayerHD. .

"It’s a great achievement to make my debut in the Premier League as it’s what every kid dreams of, and hopefully I can push on and achieve more things.”

The 27 - year - old played his first game in the EPL against Everton in August and has been involved in 14 more matches since his maiden appearance.