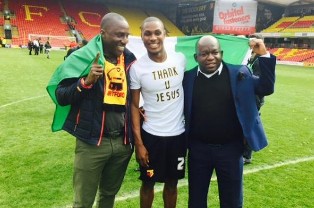 Catch up on the performance of players of Nigerian descent in the English Premier League on Saturday afternoon.

In the lunchtime kickoff, Everton were held to a 1 - 1 draw by Norwich City at Carrow Road, with England international Ross Barkley suiting up for the Toffees for the 16th time this season. The midfielder got replaced in the 76th minute.

Super Eagles strikers Victor Moses (West Ham ) and Peter Odemwingie (Stoke City) were not available for selection when their teams faced off at Boleyn Ground due to hamstring injuries. It ended goalless.

Kelechi Iheanacho has now racked up 160 minutes of game time in the Premier League after he played the last six minutes of Manchester City’s 2 - 1 victory over Swansea City. He scored a last - minute winner for The Citizens.

Odion Ighalo tallied his tenth goal of the season and Watford’s only goal in their 1 - 0 away win over Sunderland, their third straight victory in the EPL.

The attacker, who found the net in the 4th minute, is the first Watford player to score 10 goals in the Premier League.