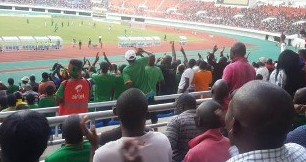 Nigeria U23 international Umar Aminu has revealed that his Turkish club Osmanlıspor will release him for the Olympic football tournament in Rio de Janeiro in 2016, after missing out on the Africa U-23 Cup of Nations.

The attacker did not have the luxury of watching his international teammates in action in Senegal but followed their performances on the internet and quickly congratulated them after they achieved their aim of qualifying for the Olympic Games.

“I didn’t specifically call any of the players but I reached out to one of the officials there to send my happiness and regards to them all, ” Umar Aminu said to allnigeriasoccer.com.

“I wasn’t able to watch the games live , where I am in Turkey it is not possible but I always follow them on livescores.

“Of course, my Turkish club will allow me feature in the Olympic Games next summer, it is the Olympics.”

During the Africa U-23 Cup of Nations, Umar Aminu was involved in all his team’s matches in all competitions and scored his first - ever goal in the Super Lig against Bursaspor a day before the Dream Team faced off with Algeria

“For me I believe in winning not who scored the goal, but of course as a striker or a forward player we need to score.

“If the chance is not yet right we keep the faith and continue working hard because for sure it will happen and it happened last weekend after so many matches played , ” Umar Aminu added.

The 20 - year - old is spending his third consecutive season in Turkey and had a stop at Samsunspor before signing for Osmanlıspor in January 2015.