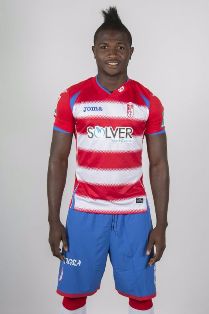 Allnigeriasoccer.com understands that Nigeria youth international Isaac Success flew to Spain on Saturday afternoon to link up with his Granada teammates ahead of their La Liga clash with Las Palmas on December 30.

The Andalusian outfit did not want a repeat of the incident last year that saw him arrive late to the club after the Christmas celebrations and have ordered him to return to Spain with immediate effect or risk being sanctioned.

The Flying Eagles star arrived in Lagos on December 21 for the traditional Christmas break and has been undergoing personal training and visited the gym ahead of Wednesday’s tie at Estadio de Gran Canaria.

The 19 - year - old Success has been one of the most important players at Granada so far this season, making 15 appearances out of a possible 16 in the La Liga.

He ha found the net against Athletic Club , Sporting Gijon and Getafe.