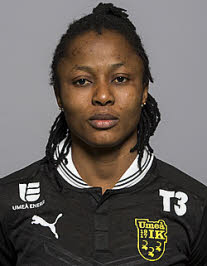 Ogonna Chukwudi has done enough to merit a place in the Super Falcons team according to the South-South Chairman of Women Football Development Association, Mr Sunny Iwegbu.

The 27-year-old attacking midfielder became an instant hit when she joined KIF Orebro from Umea in 2013 and has netted 21 goals in 48 appearances.

The ex Pelican Stars playmaker is considered one of the reasons for Orebro`s impressive rise in the Swedish Dammaslveskan and the UEFA Women`s Champions League.

She has been kept in the cooler since featuring for Nigeria at the 2012 African Women`s Championship held in Equatorial Guinea.

Sunny Iwegbu is however craving for another chance to the skillful ball joggler.

“Since Ogonna arrived in Orebro she has been one of the best players in Sweden. I wonder why a player performing at the highest level is usually snubbed by her country,” Iwegbu said.

“It baffles me a lot that her form hasn`t been well appreciated by our coaches in the past three years.

“She is playing very well, her teammates, fans, management and the coaches are happy with the impact she has made since her celebrated move from Umea. ”

He added : “I have no doubt in quality and I believe she can do very well with the Super Falcons if given the opportunity again.

“I think she has done well enough at her club to get a chance in the team to prove herself for the country she has served so much in the last. ”

Another Nigerian on the payroll of KIF Orebro is Sarah Michael.