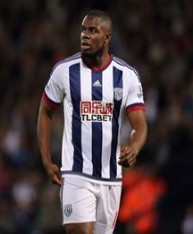 Victor Anichebe reckons that he played one of his best games in a West Brom jersey against Newcastle United and hopes to get more games under his belt after he was frozen out of the squad for most part of this season.

Tony Pulis surprisingly preferred the Nigeria international in his starting lineup ahead of Saido Berahino and he repaid the manager’s faith in him with a man-of-the-match performance.

“Whether I stay here or whether I go on somewhere else, I thought I did myself justice,” said Anichebe, according to Express & Star.

“Honestly it’s the best I’ve felt for a couple of years. I got a good pre-season behind me with the gaffer and then I pushed on fitness-wise.

“Unfortunately I haven’t really played that much. Even though it’s been such a difficult time, we’ve worked together and we’ve stayed tight the group of us.