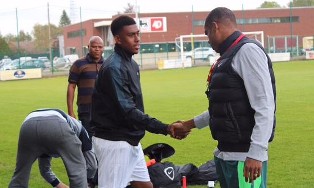 Alex Iwobi is poised to make his fourth appearance for Arsenal in the Premier League on Saturday, January 2 when the table-toppers tackle Newcastle United at the Emirates.

Monday’s 2 - 0 win over AFC Bournemouth, when he lasted barely a minute on the pitch, was Iwobi’s maiden game for the Gunners at home.

By all indications, the teenager will make the 18 - man squad for the seventh straight game across all competitions this weekend.

His uncle Austin Okocha had informed allnigeriasoccer.com late October that he may be farmed out on loan in the January transfer window due to his lack of playing opportunities in the first team.