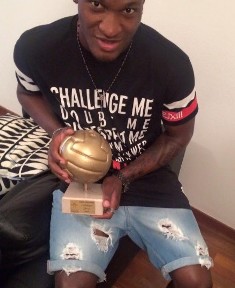 Jerry Mbakogu scored his first - ever goal in the Serie A on Sunday as Carpi defeated Sampdoria 2 - 1 at the Stadio Alberto Braglia.

The Lagos - born forward had been tipped to take the Serie A by storm in his debut season but injuries have curtailed his appearances, with the game against the Blucerchiati only his seventh start this campaign.

Mbakogu netted what proved to be the match - winner ten minutes after the interval, then, was substituted 15 minutes from time.

In the Segunda Liga, Gil Vicente made light work of Sporting Braga II, recording a 4 - 1 win at the Estádio Cidade de Barcelos, with a brace from Simeon Tochukwu Nwankwo .

In the First Division in Cyprus, ex - Flying Eagles defender Ganiu Ogungbe scored for the second game in a row in Ethnikos Achnas’ 2 -1 victory against Ermis Aradippou .