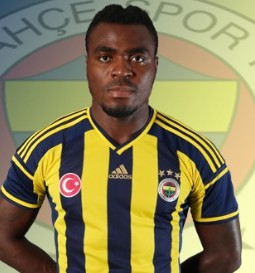 FC Krasnodar shot-stopper Andriy Dykan has declared that Emmanuel Emenike is the strangest footballer he has played with since he turned professional 21 years ago.

The Ukraine international was a teammate to the ex-Super Eagle before the attacker returned to Turkey in 2013 to sign for Fenerbahce.

“The odd player who I had to play with, probably, Emmanuel Emenike, ” Dykan said to TASS .

“In training, he joked a lot, but sometimes he was doing these things during training, which were introduced into some confusion.”

The 28-year-old Emenike has been strongly linked with a shift to West Ham in the January transfer window.