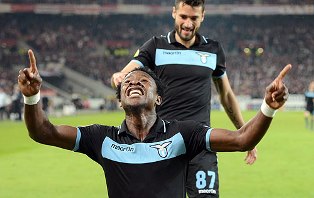 Anthony Ujah hopes Werder Bremen complete the signing of fellow Nigeria international Eddy Onazi before the close of the transfer window and has revealed that the Lazio midfielder is unhappy at the Italian capital.

There was speculation that a bid of around seven million euros has been made by the Bundesliga side but German media has now reported that Onazi is likely to be farmed out on loan until the end of the 2015-2016 season.

“Ogenyi is a good friend of mine I know that he is unhappy at Lazio because he plays little and next year is the African Cup of Nations, would be great if he comes, ” Ujah told Kicker.

“The last time I played together with  a fellow countryman was my time in Lillestrom .”

Werder Bremen are in the market for a reinforcement in midfield following the knee injury sustained by Philipp Bargfrede in their 3-1 victory against Schalke 04 this past weekend.