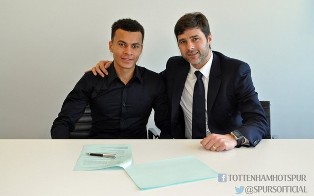 Tottenham Hotspur manager Mauricio Pochettino has explained why he had to replace Anglo-Nigerian midfielder Dele Alli at half-time as his secured a 3-0 victory over Norwich City at Carrow Road on Tuesday night.

Alli had already done the damage before he was substituted, netting his seventh goal of the season in the second minute before the referee awarded a penalty on the half-hour mark after he was fouled.

“He was a little dizzy, he felt unwell and with advice from the doctor we took the decision to substitute him for Nacer Chadli,” said  Mauricio Pochettino.

“It’s always better not to take a risk but now he feels much better. It’s not a serious problem.”

The 19-year-old Alli, an England international, has scored the most goals by a Spurs teenager in a single-season.