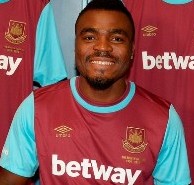 New West Ham acquisition Emmanuel Emenike could make his official debut for the Londoners when they square off against Southampton in the Premier League on Saturday.

The former Nigeria international joined The Hammers from Fenerbahce on Sunday but could not feature against Liverpool two days later because he did not have the documentation to play.

“Well we’re going to see, he’s training with us today so we have to see how he is. He could do,” manager Slaven Bilic replied when quizzed about the chances of Emenike playing against the Saints.

Emenike, who has been inactive since January 8th, trained for the first time with his new teammates on Thursday.

A video clip uploaded to West Ham’s official webpage showed that he was sticking to Victor Moses like glue during the training session.