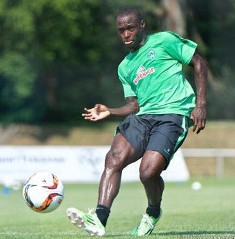 Anthony Ujah has informed allnigeriasoccer.com that he has passed a fitness test and WILL travel with the Werder Bremen squad for their DFB Pokal clash with Bayer Leverkusen at the BayArena on Tuesday.

The Nigeria international subbed out in the 57th minute in last weekend’s clash with Borussia Mönchengladbach after picking up a thigh injury.

“I was injured on my right thigh but I took part in the final training before the game and was passed fit by the medical team.

“I will be in the squad to travel to Leverkusen, ” says Anthony Ujah to allnigeriasoccer.com after Monday’s training session.

Ujah has a 100 percent goalscoring record in the DFB Pokal so far this season after finding the net in the earlier rounds; in matches against Würzburger Kickers, Cologne and Borussia Mönchengladbach.

And in the Bundesliga, the 25-year-old has been Werder Bremen’s main man as well, with 8 goals to his name from 20 games.