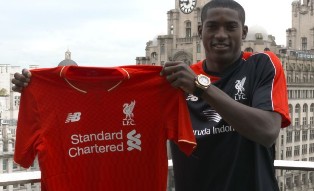 Dream Team VI star Taiwo Awoniyi finally made his league debut for FSV Frankfurt on Friday night in their 3-1 victory against St. Pauli on game week 22.

Before today’s contest at the Millerntor-Stadion (Hamburg), the striker had made FSV Frankfurt’s 18-man squad on six occasions but was not given a run out in any of those games and his only appearance was in a Cup game versus Hertha BSC four months ago.

Manager Tomas Oral handed Awoniyi his first start as a professional and the youngster lasted 89 minutes on the pitch before he was replaced.

The 18-year-old would have opened his account for the 2 Bundesliga club after 90 seconds but saw his effort narrowly miss target.

Moments later, he failed to connect a cross from Hungary international Zsolt Kalmár, then, had a good opportunity to increase FSV Frankfurt’s lead seven minutes before half-time but missed a one-one-one situation with the goalkeeper.

Taiwo Awoniyi is on loan at FSV Frankfurt from Liverpool until the end of this season.