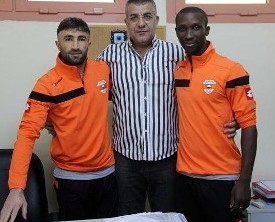 The Enugu Rangers product, who was named in Adanaspor’s starting XI for the 21st time this season, scored the important goal which gave his team all three points in the 62nd minute.

Ozokwo has started every single game contested by Adanaspor in the league this term except the tie with Gaziantep BB which he missed as a result of accumulated bookings.

The 27-year-old has notched six helpers in the ongoing season, in games against Balikesirspor(September 18), Yeni Malatyaspor (September 28), K. Erciyesspor(October 3) and Sanliurfaspor(January 17).

He has gone the distance in his last ten games and has made 3 appearances in the Turkish Cup, scoring against Diyarbekirspor.